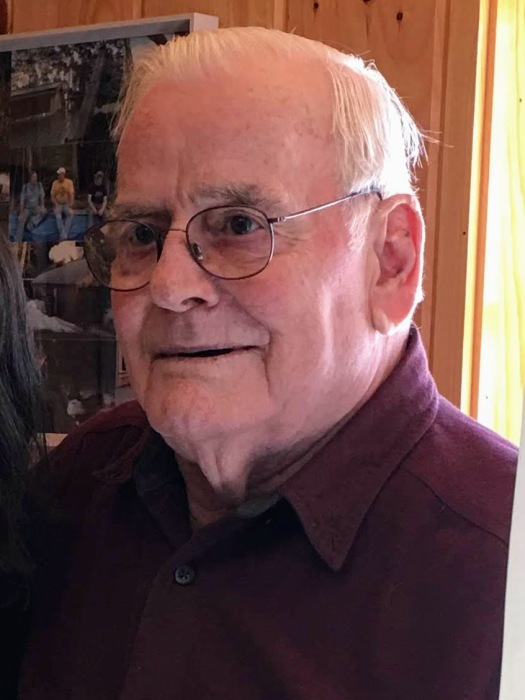 Daniel "Bud" S. Brooks, lifelong resident of Freedom, NH, passed peacefully from this world Wednesday March 31, 2021 in the presence of loved ones, after a courageous battle with Idiopathic Pulmonary Fibrosis.

He graduated from Ossipee High School in 1948 and joined the Navy, serving on the USS Requin submarine from 1949-1950 on its first deployment with the Sixth Fleet. He went on to work for the Ford Motor Company in Somerville, MA for several years.

Bud married M. Agatha (Maclellan) Brooks in September 1959 and together they raised their 4 children in Freedom. They shared 26 years of life and love before Agatha's passing in 1985. He went on to marry Adrienne (Doughton) Brooks in 1988 and shared 17 wonderful years with her before her passing in 2006.

After working with his father and brother, Wendell, Bud became a self-employed builder and became well known for his craftsmanship. There are many homes in Freedom and beyond that still bear witness to his skill as a builder and finish carpenter.

Bud was very community oriented and served the Town of Freedom in several different capacities including 31 years on the Fire department, with 2 years as chief, and 21 years as a school bus driver: he gave a grand total of 146 years for service to the town. He was recognized by the Secretary of the State of NH in November 2020 for 56 continuous years serving as a Supervisor of the checklist; the story resulted with his picture being published in the NY Times.

Bud is survived by his children: Laurel and husband Art Despins of Columbia, MO; Anne Bilodeau and boyfriend Tom Grant of Gorham, ME; Marie and husband George Olson of Center Conway; Kevin and favorite daughter in law Dawn Brooks of Wayne, ME; stepdaughter Denise and husband Jim Tinguely of West Newbury, MA. He is also survived by his significant other of 13 years Patricia McCoy.

He was an incredibly proud Grampy to his grandchildren, who were the light of his life: Megan Bilodeau, Sean Despins, Adam and Jason Brooks and Danny and Justin Olson; also, his step-grandchildren Katie Hayes and Johana LeStrat.

Bud lived a life of integrity, honesty, and respect for others. He loved his family with every fiber of his being and leaves a long legacy of commitment to others which will carry on. In lieu of flowers, the family requests that donations be made in his name to the Freedom Fire Department, of which he was a lifelong member: Freedom Fire Department, 218 Village Road, Freedom, NH 03836

Services are to be announced

Plant a tree in memory of Daniel "Bud" S Brooks

Our condolences to the family of Bud Brooks.

To Pat and the Brooks Family,

Sincere condolences for your loss. Bud will be missed by all as he touched many lives.
Bud’s life was one of service to country, state and community.

A Memorial Tree was ordered in memory of Daniel "Bud" S Brooks by The McClare Family.  Plant a Tree

My condolences to the Brooks family and friends. Mr. Brooks was a fine man, well-liked by young and old throughout the years. He may be gone but his memories will live on in the minds and hearts of those who knew him. In God's care, he is at peace. John 5:28,29

The Brooks Family,
Please accept our deepest sympathy for your loss.
The loss of a parent is never easy., but know we are with you through your grief.
We are thankful to have shared great memories with your Dad.  We will miss him. Where life passes, memories carry on forever.
God Bless ALL.
Love,
Aunt Vera & Uncle Urban

I was so sorry to hear of your passing. My condolences to all of your family. We spent many a day together,as you was in my class. We graduated together at Ossipee High School, in 1948. It was a small class,but everyone was a friend. May you REST IN PEACE.. 🙋🙏💔 Joyce ( Eldridge ) Larrabee.....

Plant a tree in memory of Daniel "Bud" S Brooks