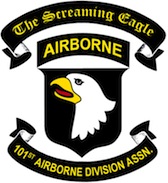 Fred H. Antonucci, of Wolfeboro, lost his battle with Covid and passed away on Friday January 29, 2021 at the age of 75.  He was born in Waltham, Massachusetts to Irma (Craigue) Clough.

Fred enlisted in the United States Army in April 1966 and served with the HHC, 2d Bn, 327th INF, 1st Bde, 101st Airborne Division Hawk Recon during active wartime of the Vietnam War.  He was awarded the Purple Heart and the Army Commendation Medal for Heroism with “V” Device.  He was honorably discharged at the rank of Sergeant E5 in 1969.

If you needed to find Fred you could be sure to find him on the fairways of the Kingwood Golf Club, on the bench at Pop Whalen Hockey rink, or his garage.   He was fiercely competitive and an exceptional golfer as he was a three-time consecutive Kingswood Golf Club champion.   He loved that.   He was passionate about golf, hockey, and running his business but nothing came before his family. Family meant everything to him.   A close second was the joy that came from coaching hockey.   He was one of the original organizers of the Back Bay Hockey Association and coached Back Bay Pee Wee and Bantam hockey before moving on to coach High School Hockey at Kingswood Regional High School.  Fred coached the Kingwood Varsity Hockey team for 19 years.   His passion for the game was only surpassed by his commitment to his players.   He took great pleasure in watching his players grow into respectable young men and knowing he may have helped them along the way.

He will be laid to rest in a private ceremony later this year.  A celebration of his life will be held at a later time.  In lieu of flowers donations can be made to the Lakes Region Humane Society.

To send flowers to the family or plant a tree in memory of Fred H. Antonucci, please visit our floral store.